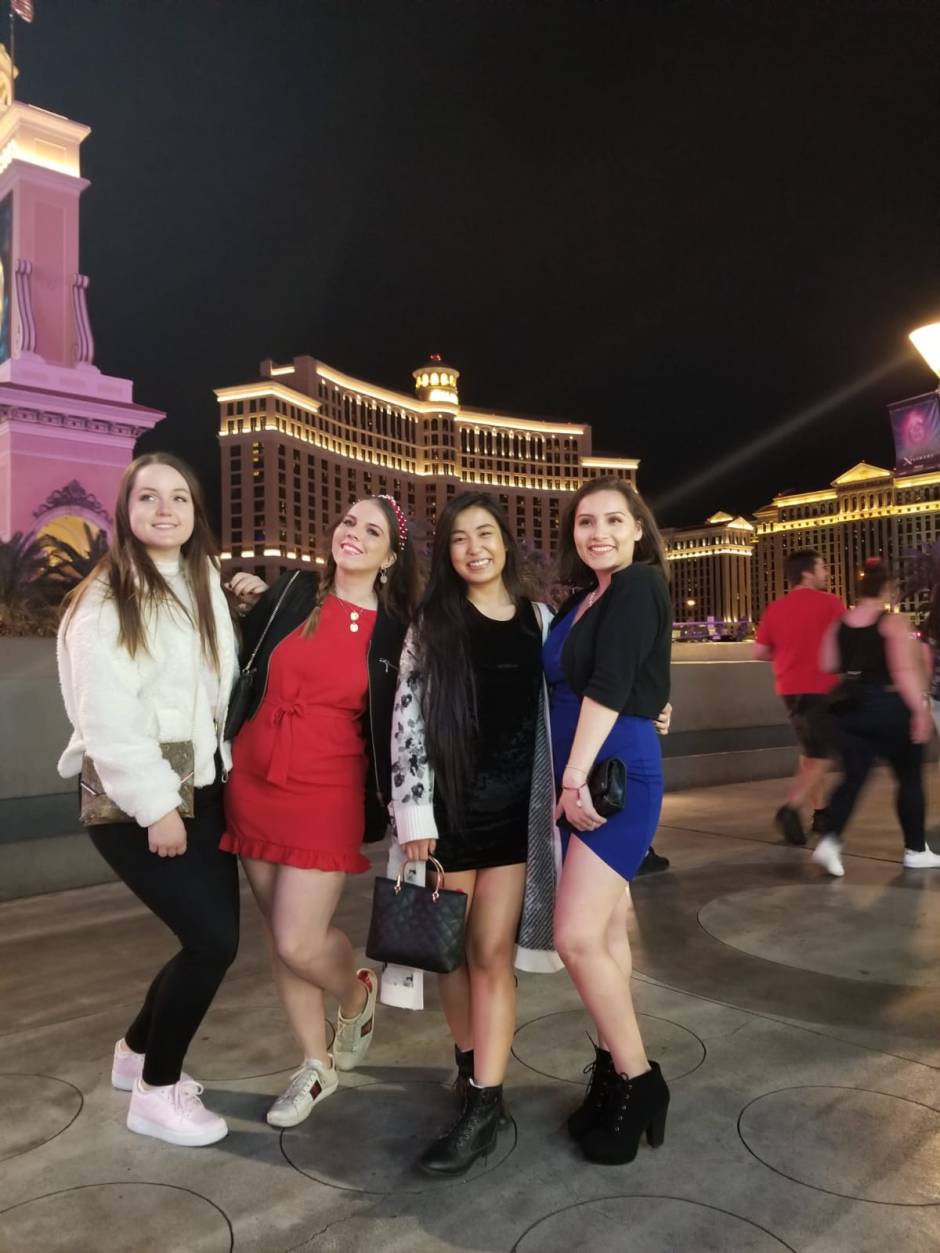 I’m so excited to finally start sharing my Vegas trip with you all!! If you were not aware, I had the chance to go again earlier this month before shit hit the fan lol. I was honestly very happy with that fact that we went when we did, because if it had been any later, we probably would’ve had to cancel our plans and I never would’ve met another one of my besties! But let’s get started and let me tell you what we did on our first day.

So first thing on March 8th, we arrived at the airport at 5am and our plane took off at 6am. I only had about four hours of sleep due to daylight savings time and I felt anxious before the plane took off because flying scares me, but because I was so damn tired, I was able to take a nice long nap. I woke up 30 or 40 mins before we landed and got to see the sunrise. What a lovely sight! 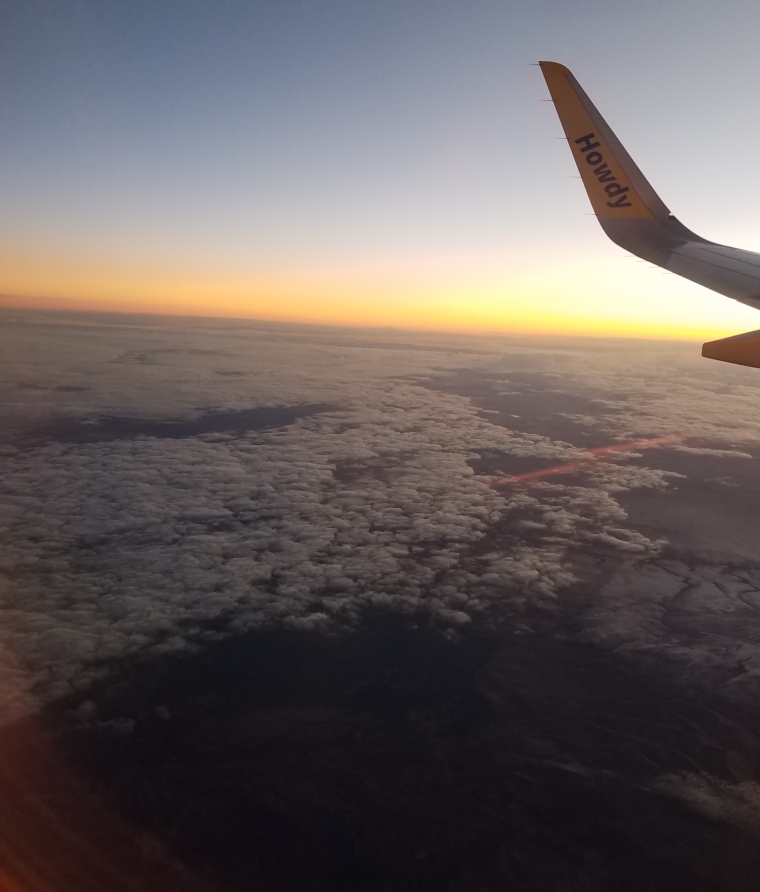 Once our plane landed, we made our way to pick our baggage and our rental and headed to Coco’s Bakery Cafe for breakfast. 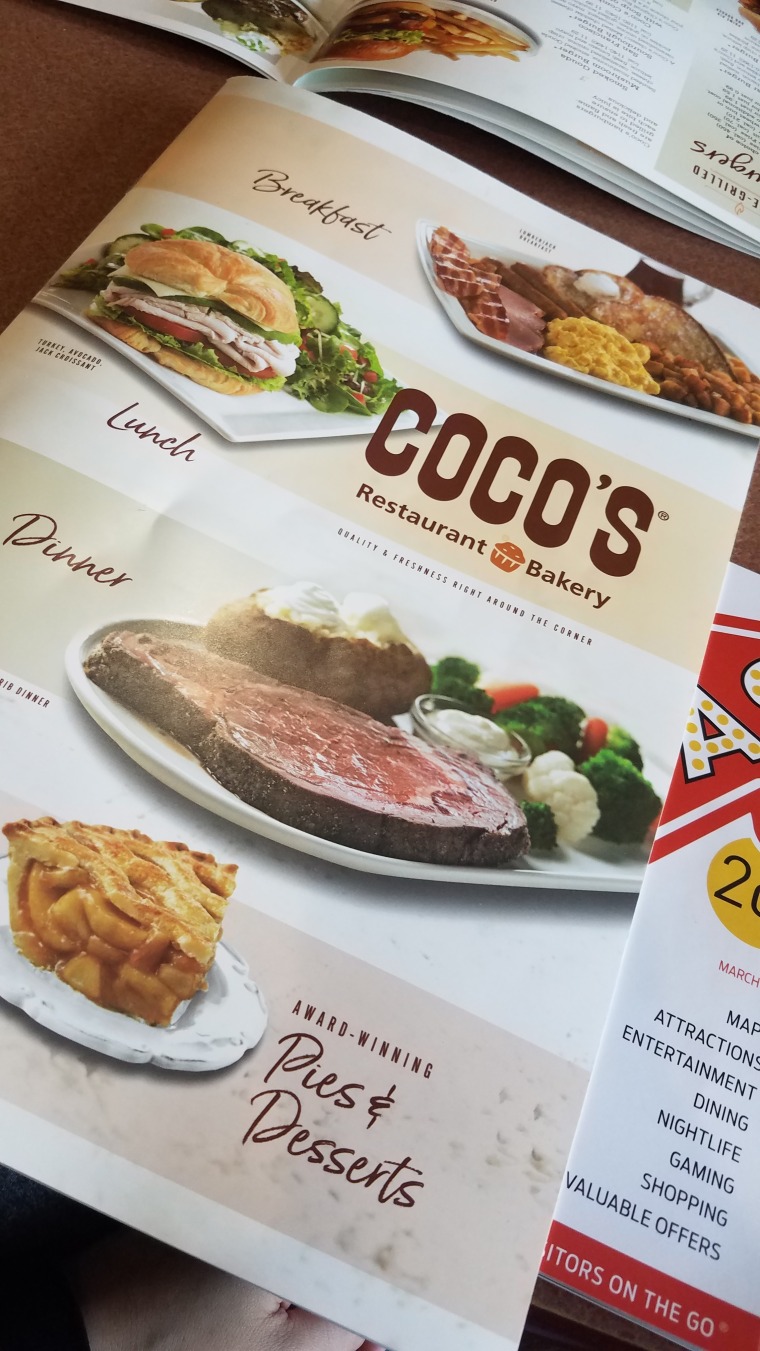 I was so hungry that I forgot to take photos before I started eating, so here is a pic before I finished it lol. I got Brioche French Toast and it was exquisite! I don’t remember what kind of sandwich Alex had gotten, but it looked good and he enjoyed it. CL just got the classic mac n cheese. 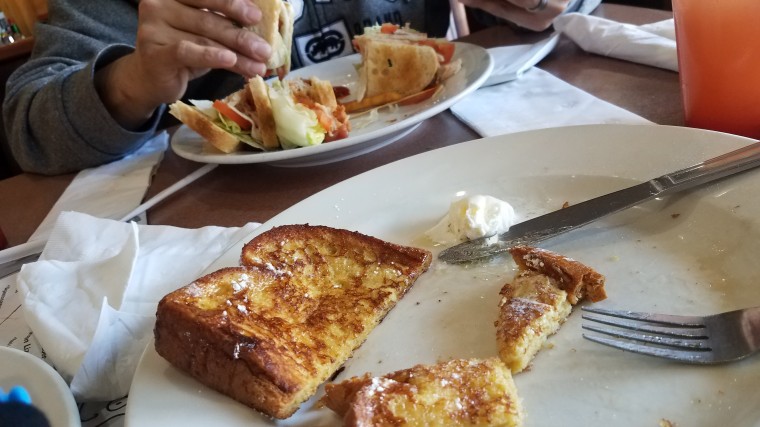 After eating we made our way to North Vegas to a park for CL to let out some energy before heading to Las Vegas Motor Speedway. We ended up stopping by Alexander Villas Park as recommend by my bestie Hunida. The park was cool and I love how it had these giant umbrellas to keep the playground cool. So Neat! Wish we had that here. CL even made some friends! 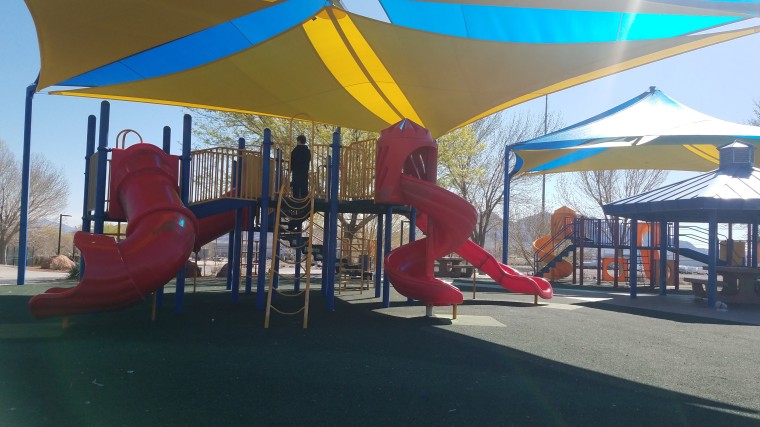 Then we headed to Dream Racing Driving Experience at Las Vegas Motor Speedway. Hardly anyone was in the lounge because they were outside. These driving experiences are in groups, so Alex was grouped with four other guys. They had them watch a video first, then they race-suited up! So cute seeing CL trying to help his dad! Awwhh! 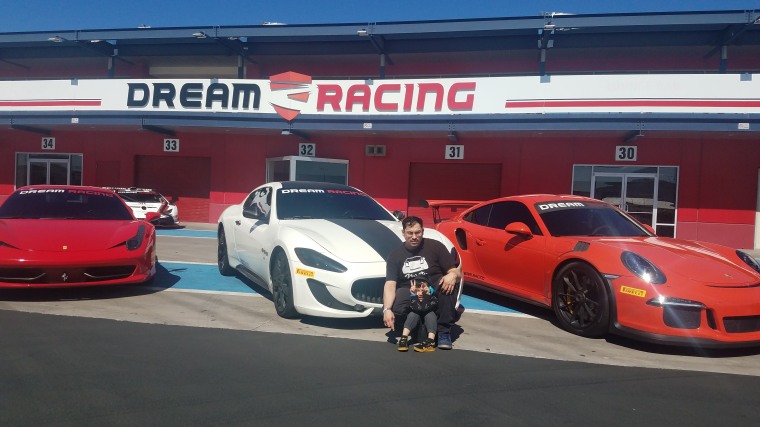 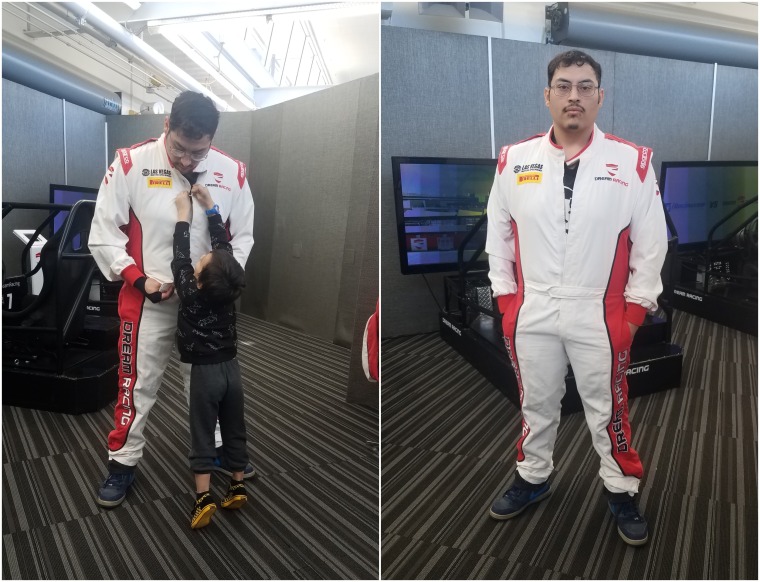 I love that Alex asked to take a picture by this wall, right next to a F1 racing legend, Ayrton Senna. We almost named our munchkin Ayrton but decided against it because people would have a hard time pronouncing his name. Ironically, people mispronounce his name, so.. 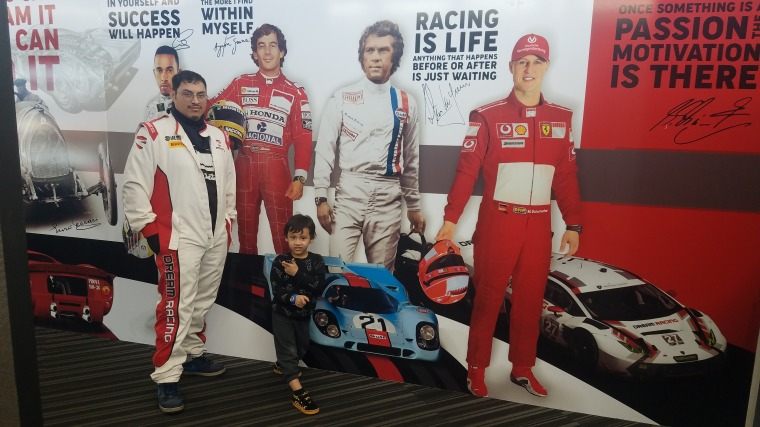 Alex waited for an instructor to start a short simulation on these machines and then we went outside to see the cars and see Alex drive around the track in a beautiful GTR! CL had a lot of fun watching his dad drive around and we were told we could get inside the cars. CL enjoyed that too 🙂 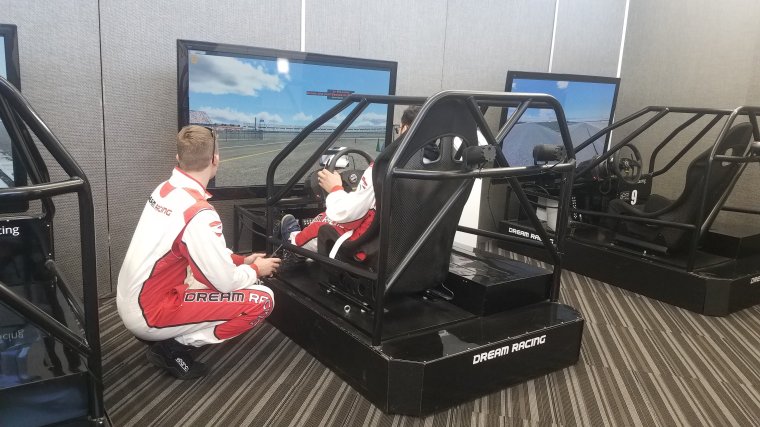 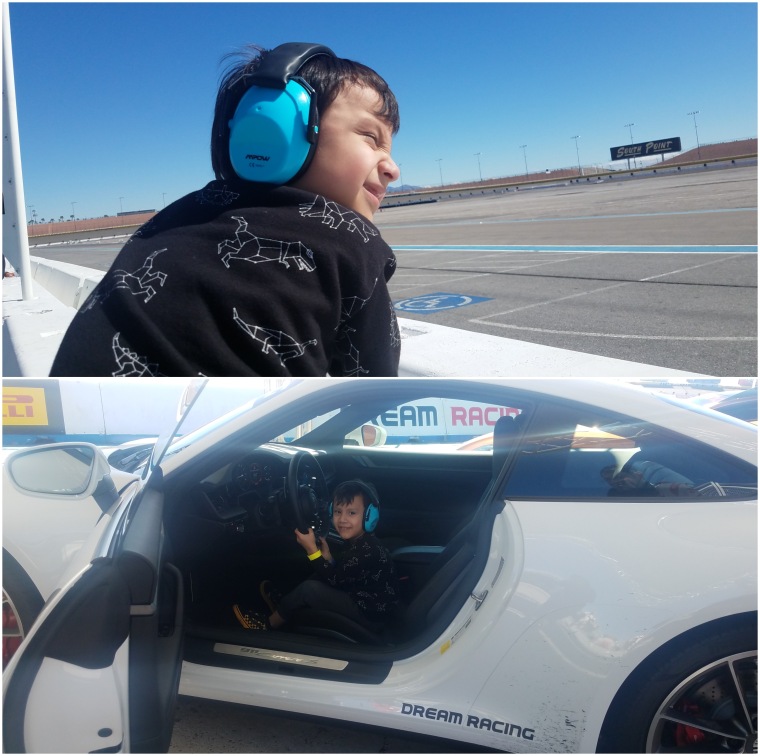 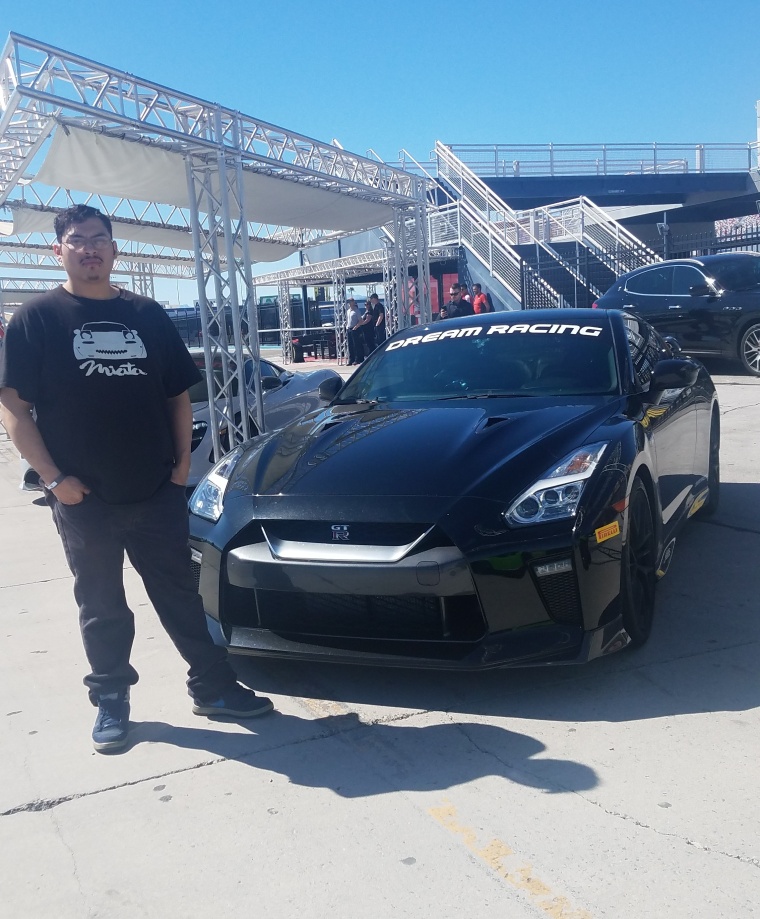 I had Alex take a picture of me on the way out.
Then we headed back near the strip for lunch! 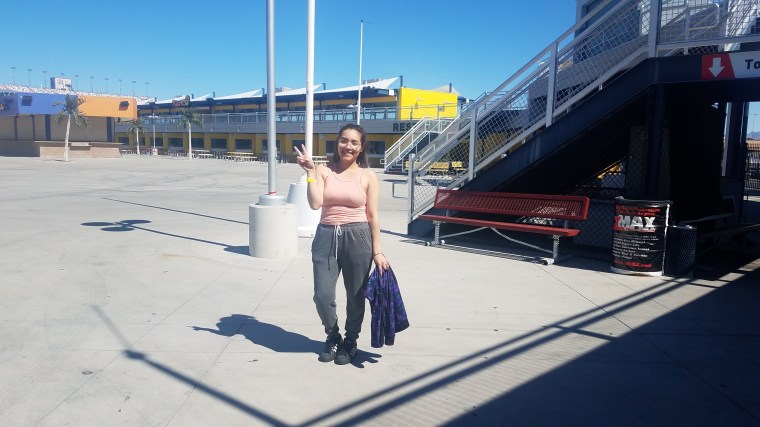 A few of you know that Alex makes some really amazing sushi and we didn’t get a chance to go there in November. So we made sure to include it in our travels this time, Sushi Culiacan. It’s what we call ‘Mexican Sushi’. 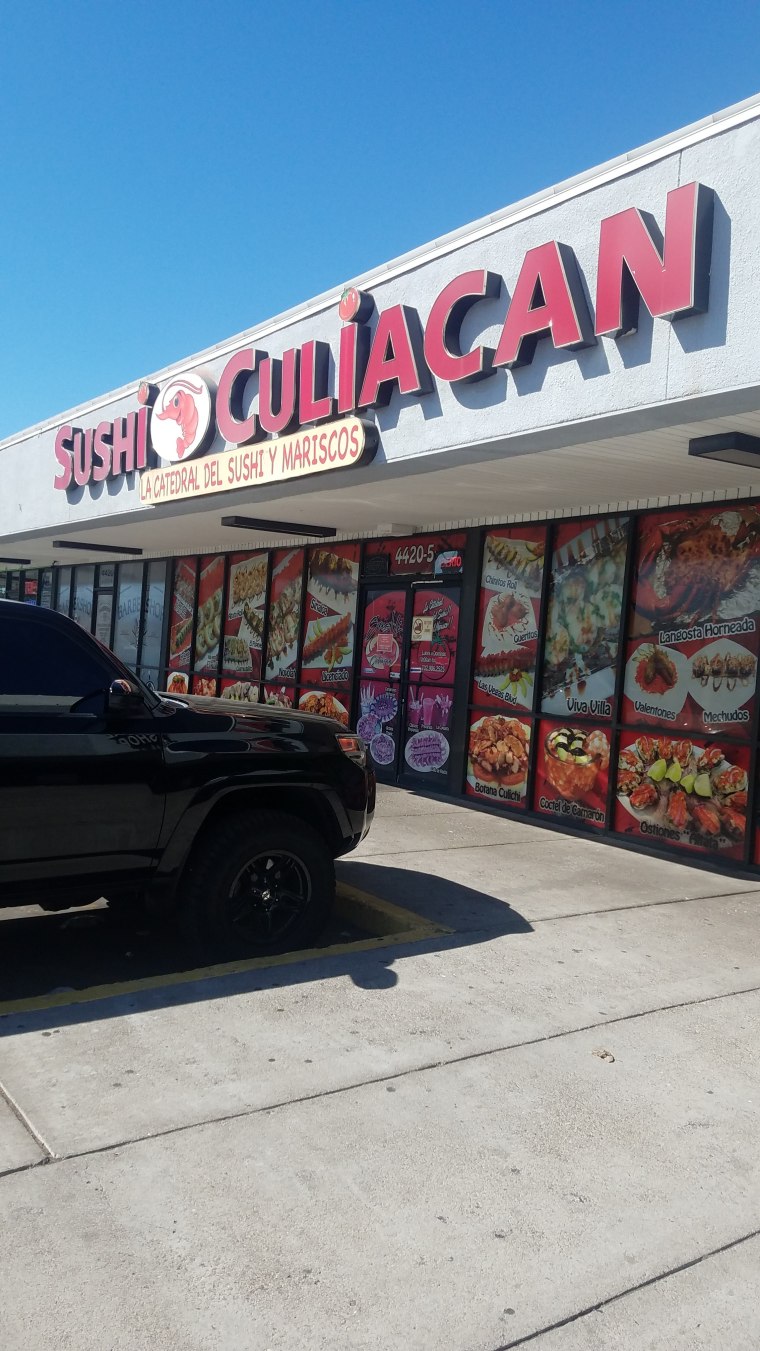 I got a Mangonada which was delicious and refreshing!
CL got chicken nuggets that were neatly presented, lol. 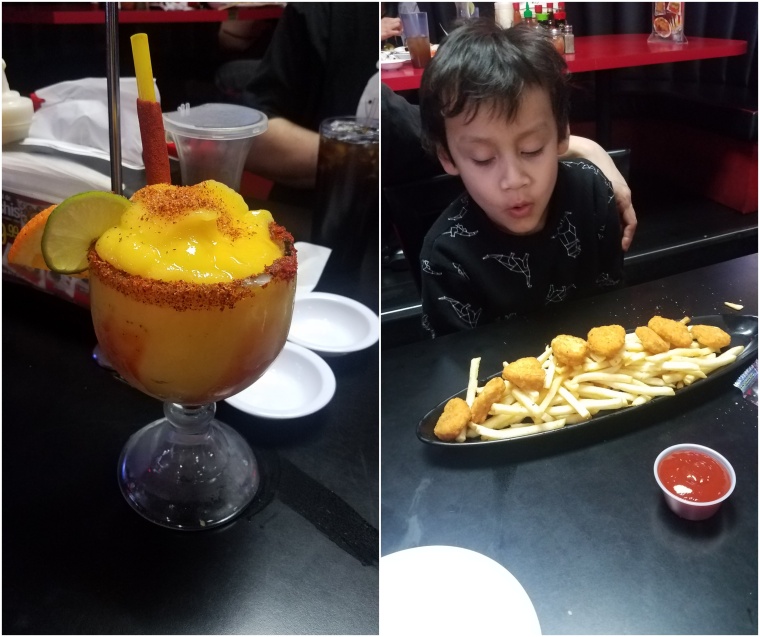 As for the rolls, I got the Vallarta roll made with shrimp and crab on the inside with a spicy crab salad topped with cilantro sauce. I don’t remember which roll Alex got, I’m so sorry!! Both rolls were so delicious, but I LIKE Alex’s better? There were subtle differences between his and this place, and I loved the cilantro sauce on top of my roll, but other than that, I think I can trust Alex to make mine the way I want them. I highly recommend this place so you all can finally try this ‘Mexican Sushi’ I’ve been talking about for years lol.

After we finished eating, I called one of my best friends who I haven’t seen in over 10 years. He was in Vegas that weekend for a friend’s birthday, which was a fortunate stroke of serendipity! We picked him up from his hotel and headed to Fashion Show Mall to walk around and catch up.

He finally met my boys; my husband and my son, and it was such a blast catching up with him. My boys liked him too and thought he was chill. I hope we don’t let another 10 years go by before we see each other again.

Around 4:30pm we decided to head back and drop my friend off at his hotel, and go check-in to our hotel so I could get ready for a girls night out. I had Alex take a picture of me before he dropped me off at the New York New York Hotel & Casino to meet up with the girls—Hunida who I’ve already met in November, and Jennie and her friend Emily whom I would be meeting for the first time. So exciting! 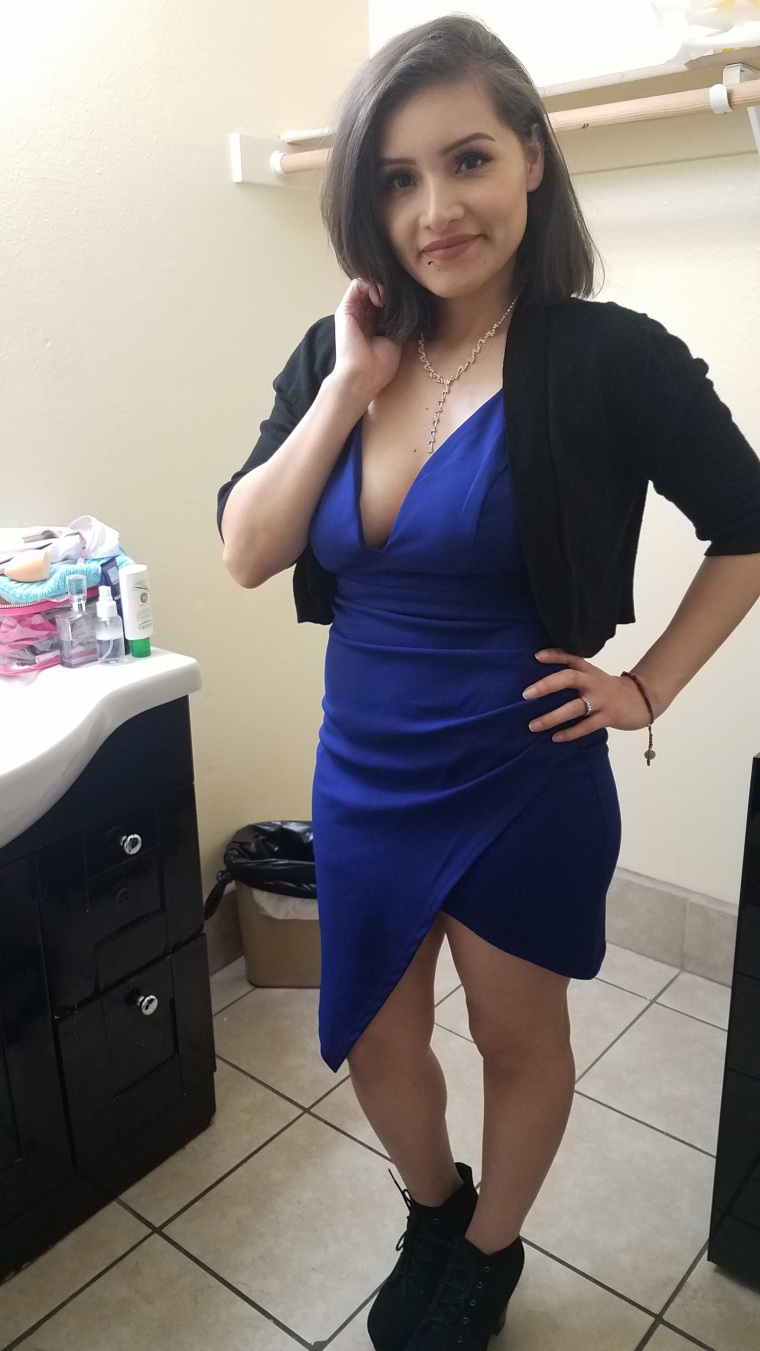 This is the dress I wore for my Anniversary dinner!!!
READ: Celebrating Our 8 Year Wedding Anniversary at Chart House Portland

I got there first and waited for the girls. Hunida arrived shortly after and she helped me find the restaurant we chose, Il Fornaio. We sat in the patio so we could see the girls when they arrived and to people watch. Felt more casual. 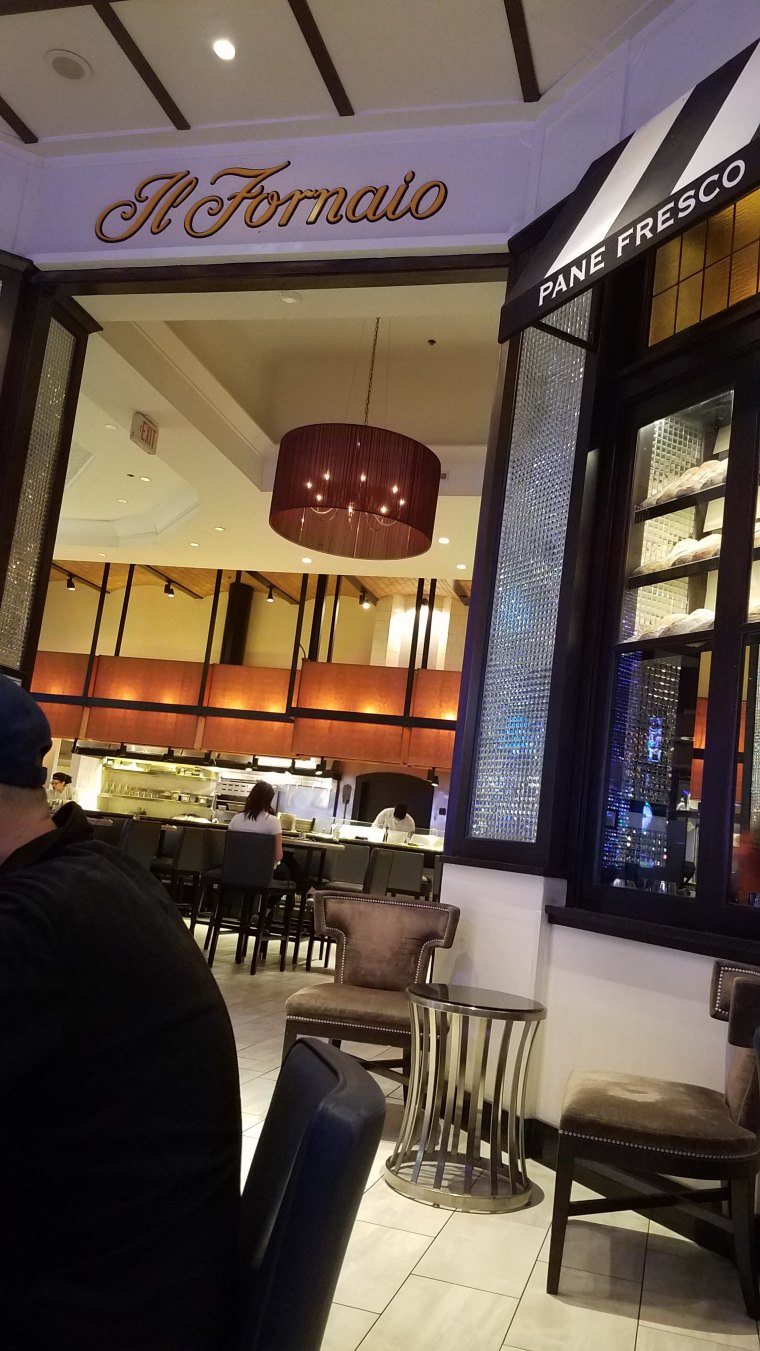 Hunida and I got sangrias while we were waiting, and it was my first time getting one, so I wasn’t sure what they were supposed to taste like? But like Hunida said in her post, they definitely tasted a lot like fresh squeezed oranges?? It was alright. 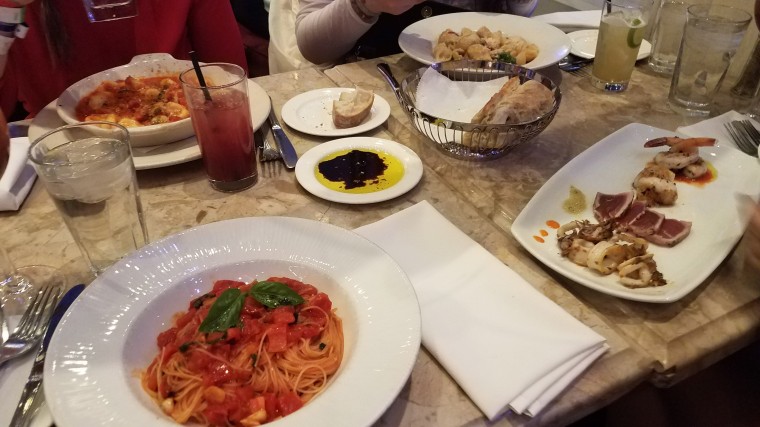 I got Capellini al Pomodoro which was Angel hair pasta, chopped vine-ripened tomatoes, garlic, marinara sauce and fresh basil. I got this one because it was vegan and I didn’t want to risk any dairy the first day of my trip. It was absolutely delicious but as much as I ate, it seemed like I barely touched in. It broke my heart to leave my food because I didn’t want to take it and walk around with food on a girls night out lol. 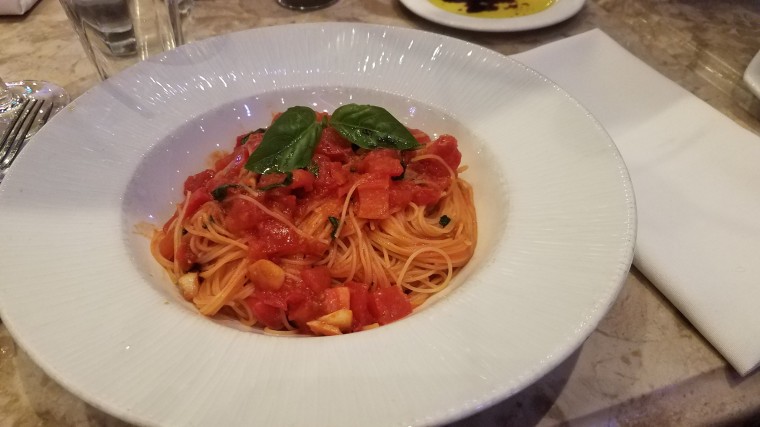 We sat and talked for a bit and then the girls decided they wanted to go to the Morphe store since none of us had ever been there. On the way to Planet Hollywood, we got our group photos taken by two lovely gents! 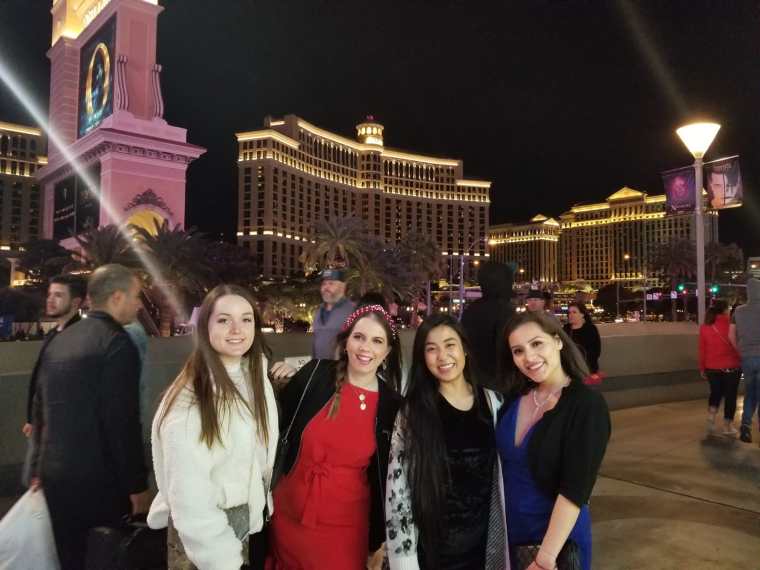 And Emily got a photo of the three bloggers! ❤
Thanks Emily!!<33 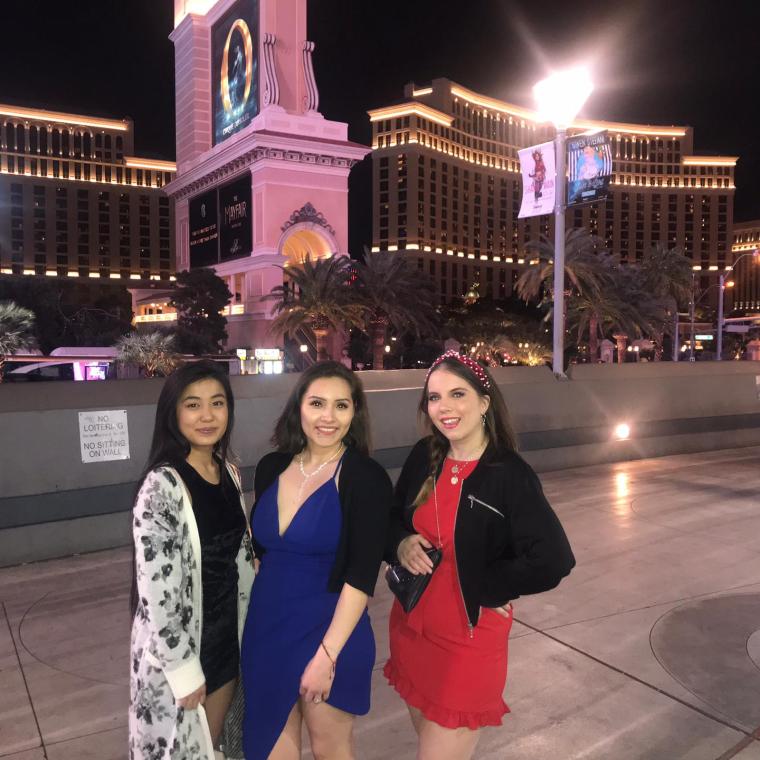 At Morphe we all swatched some makeup and walked around checking out all the makeup from JSC, because come on, like the man or not, the makeup is top notch. Once we were all done, we walked to the Bellagio fountains to enjoy a show with the song “Lucy in the Sky with Diamonds”. One of my favorite Beatles songs growing up. 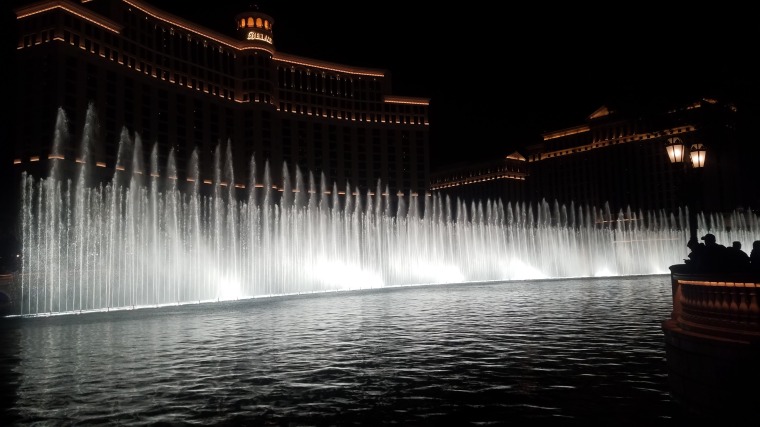 Afterward, we walked across to the Paris Hotel and found a rooftop bar called Beer Park. I got a delicious blue drink called Badge of Honor made with Skyy Citrus Vodka, Blue Curacao, Lemonade and Sprite. The bartender was probably drunk because we repeated our order several times. 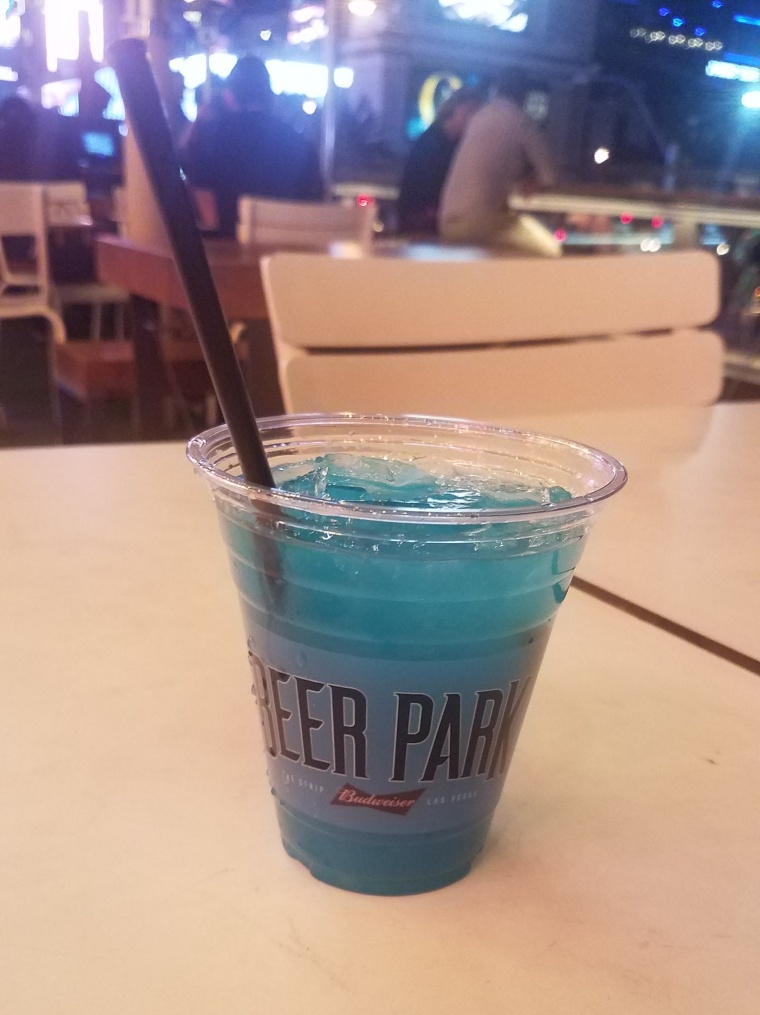 Sitting on the rooftop was lovely. We had a nice view of the Paris Hotel and the Bellagio fountains. I wish we could have gotten some food but we arrived a bit too late for that. If I had gotten food, I would have gotten a second drink. 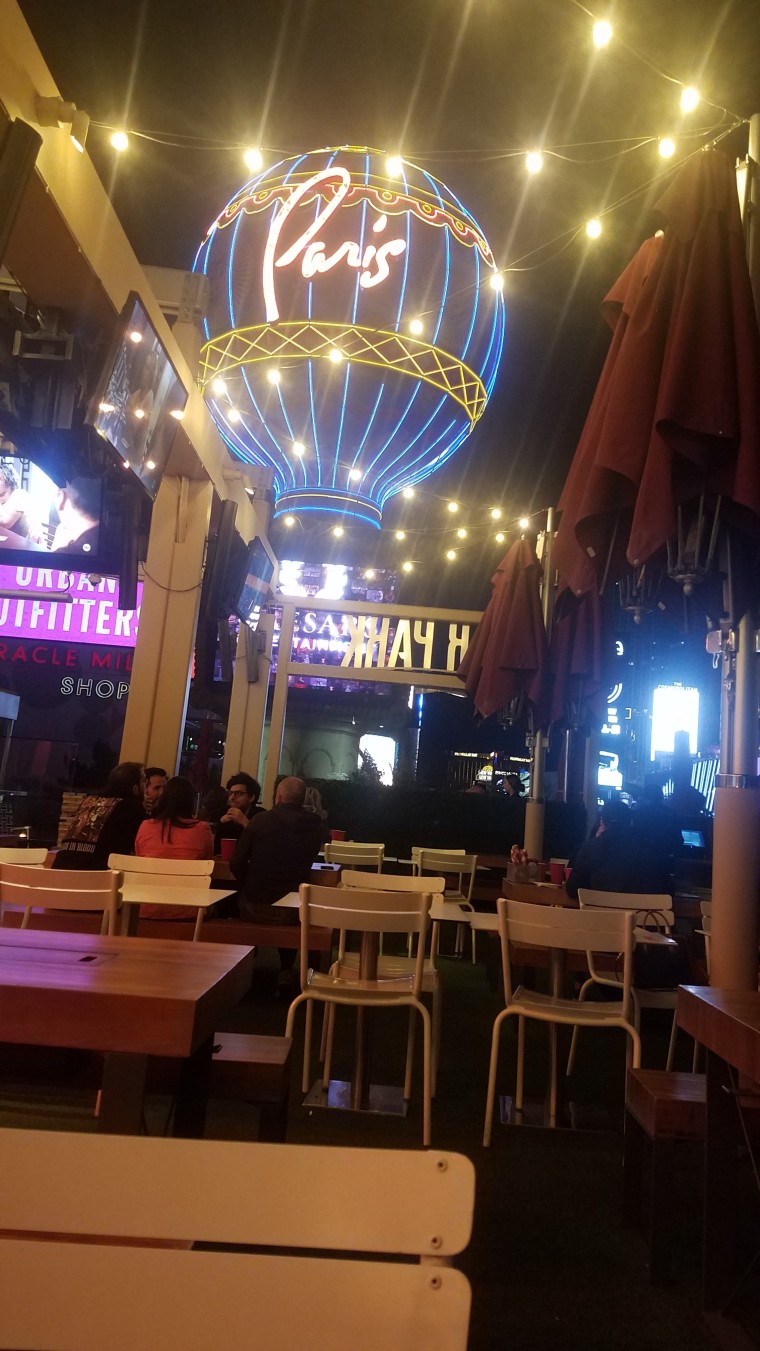 We said goodbye around midnight and Hunida’s bf came to pick us up, and they dropped me off at my hotel (thanks guys!). I loved my time with these girls. They are all so lovely, kind, down-to-earth and most of all beautiful!! It was so nice to meet Jennie and Emily for the first time ever. I loved their accent too! ❤ I already miss every single one of them and cannot wait to see them again soon, I hope. 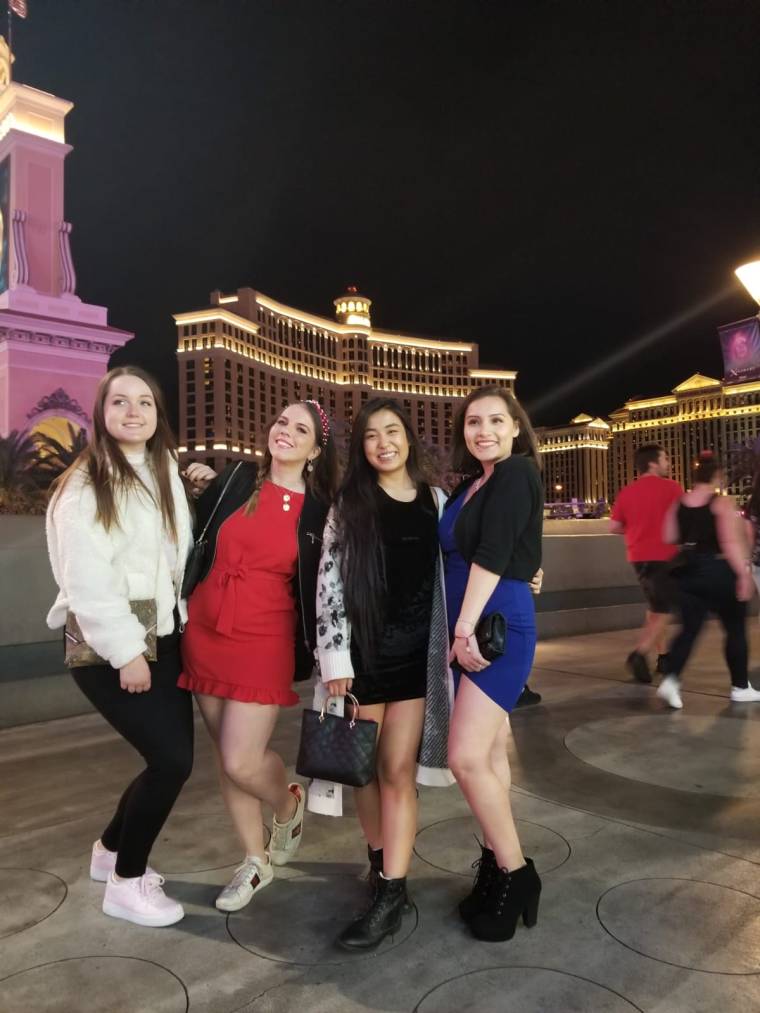 Once I got back to my hotel, I took off my makeup and went to bed. The next morning was going to be a long one as we would be driving about two hours outside of Vegas to the Death Valley National Park! Can’t wait for all of you to see the photos! 🙂

Find me on social media: 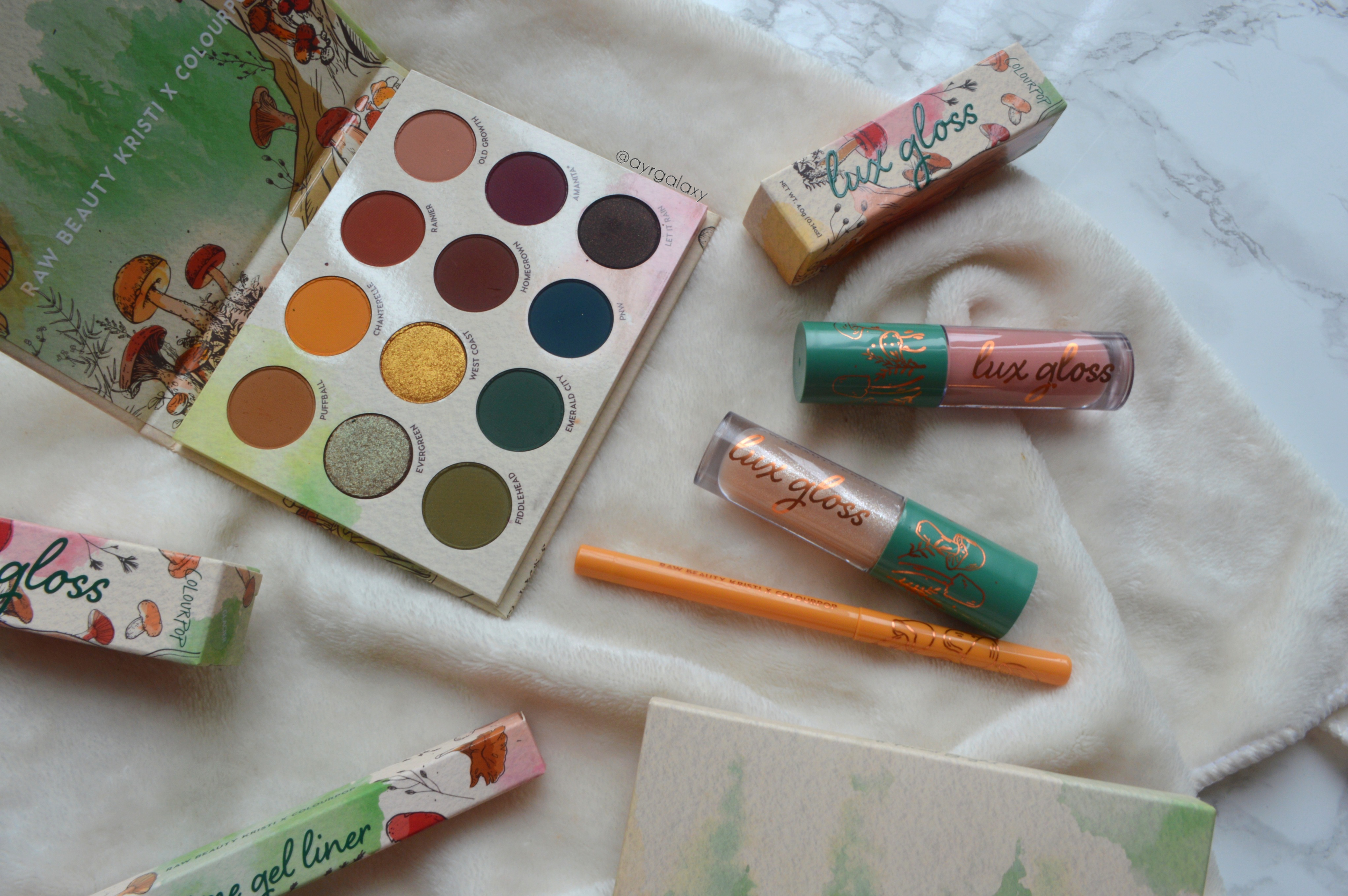 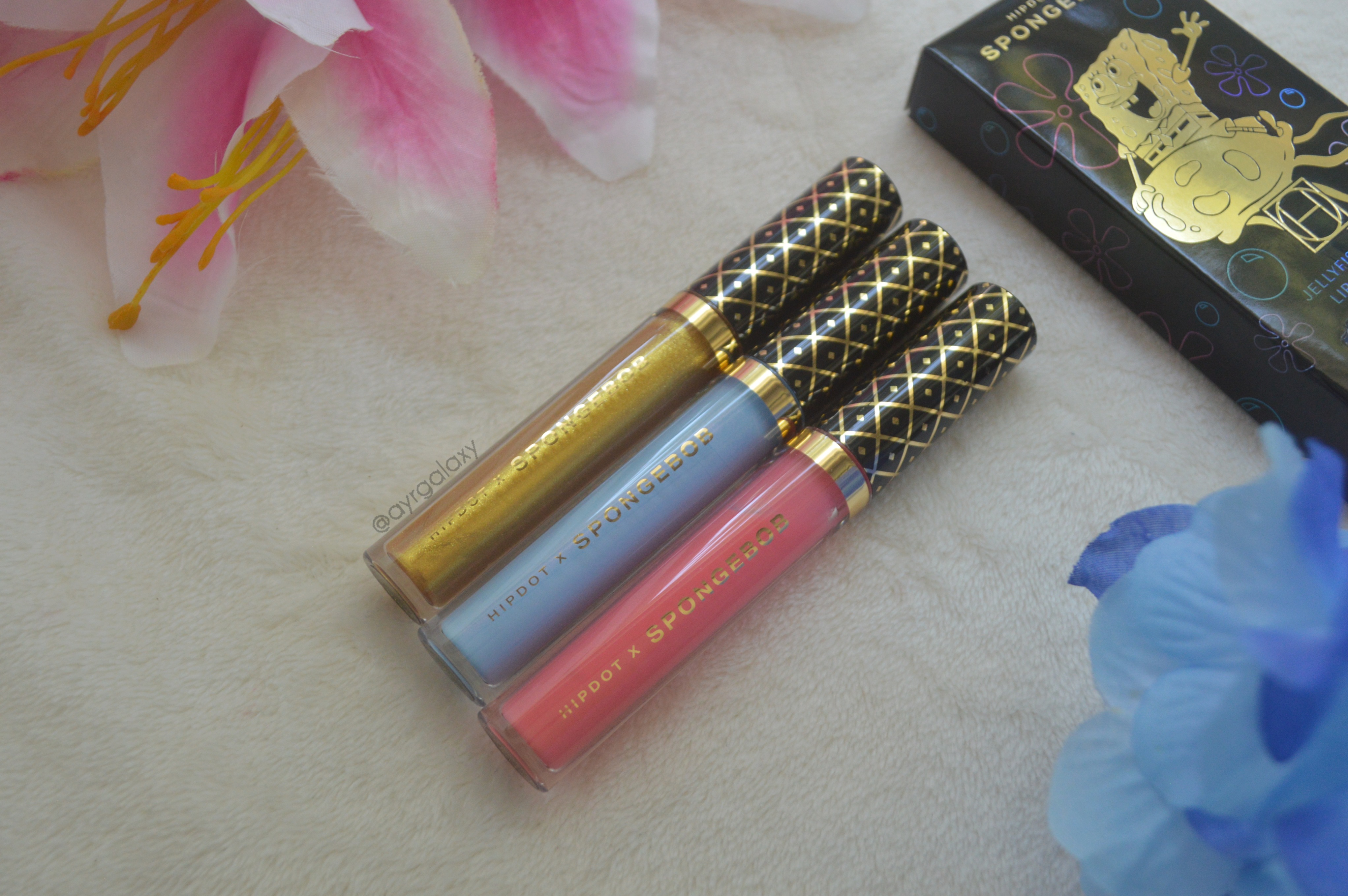 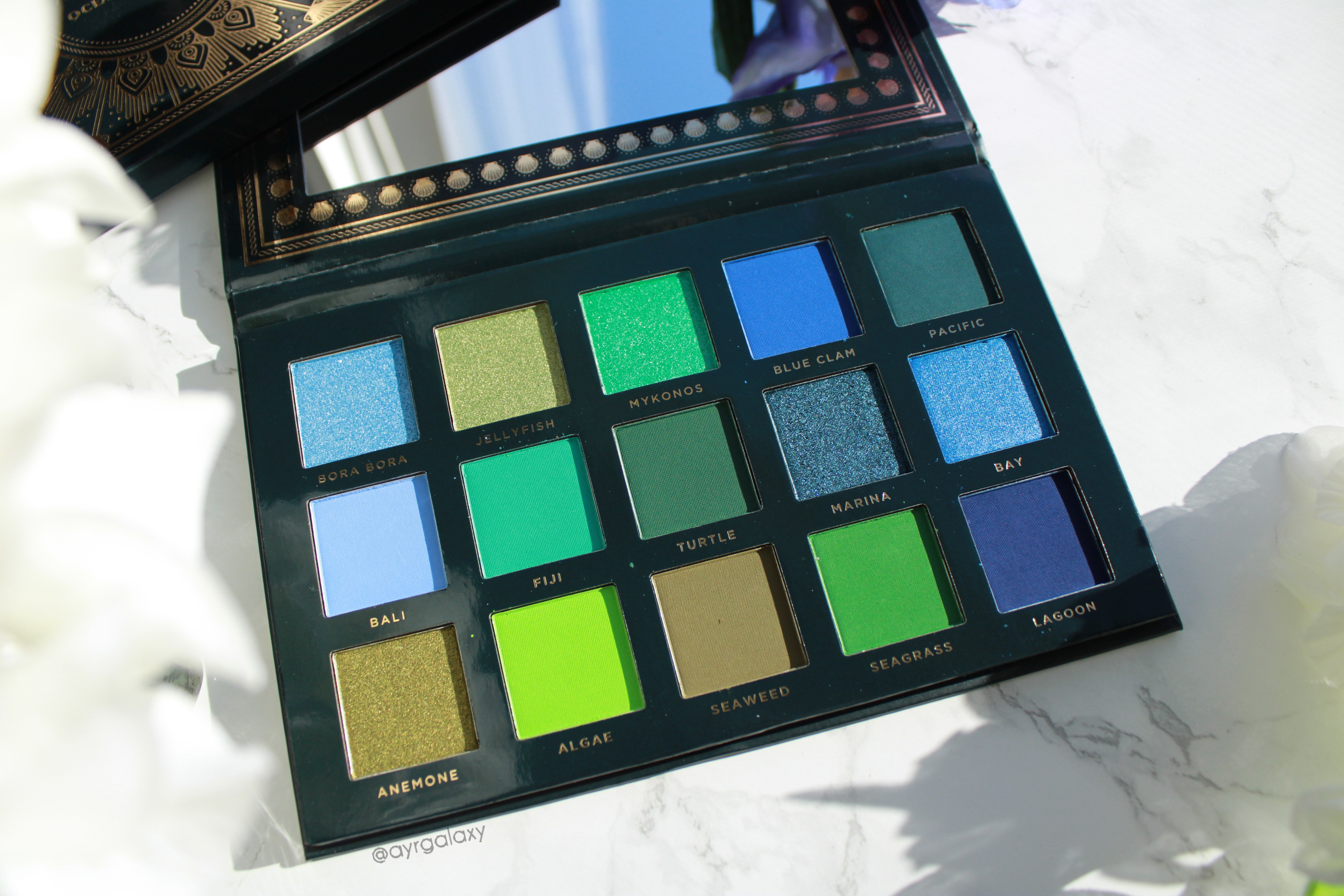 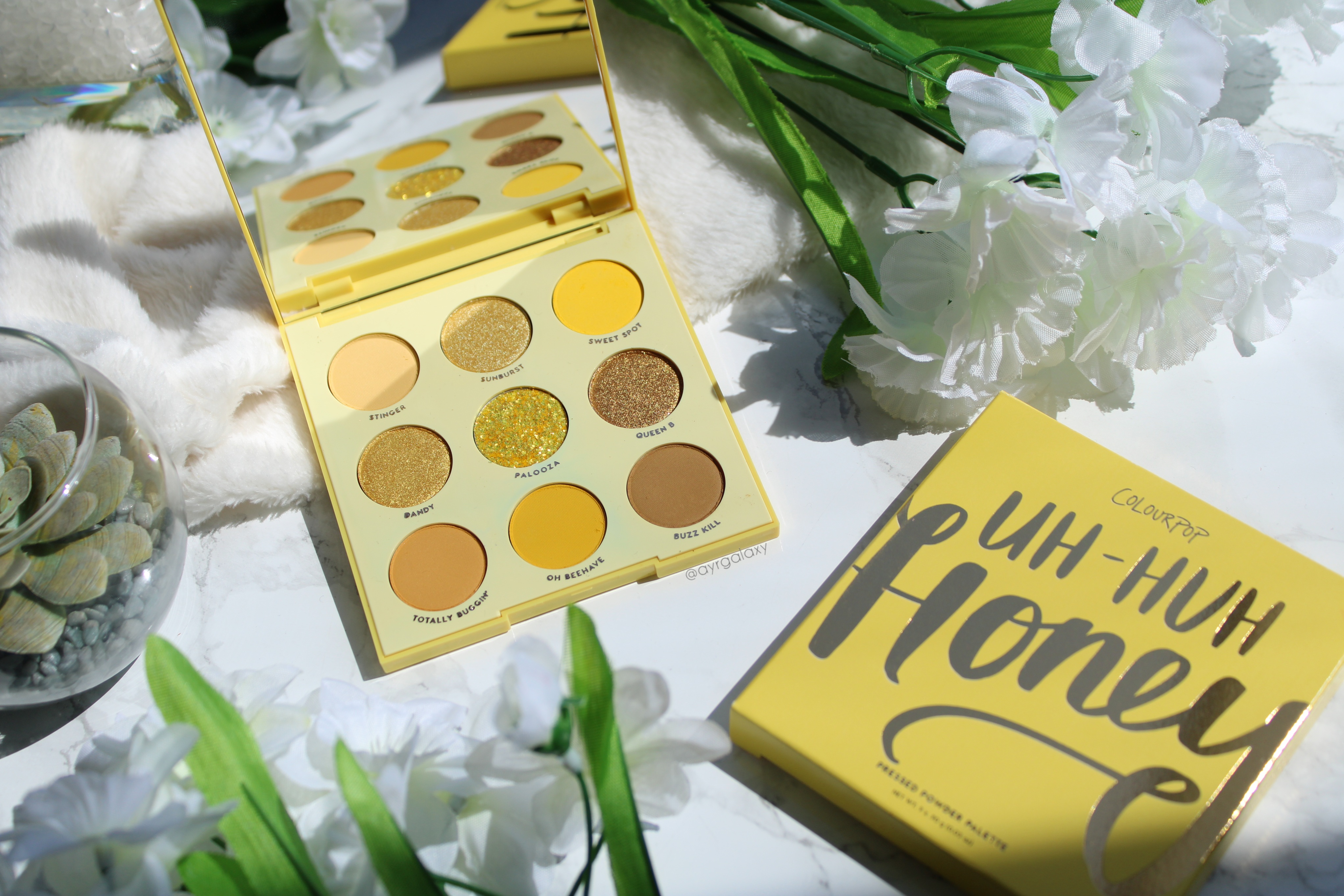 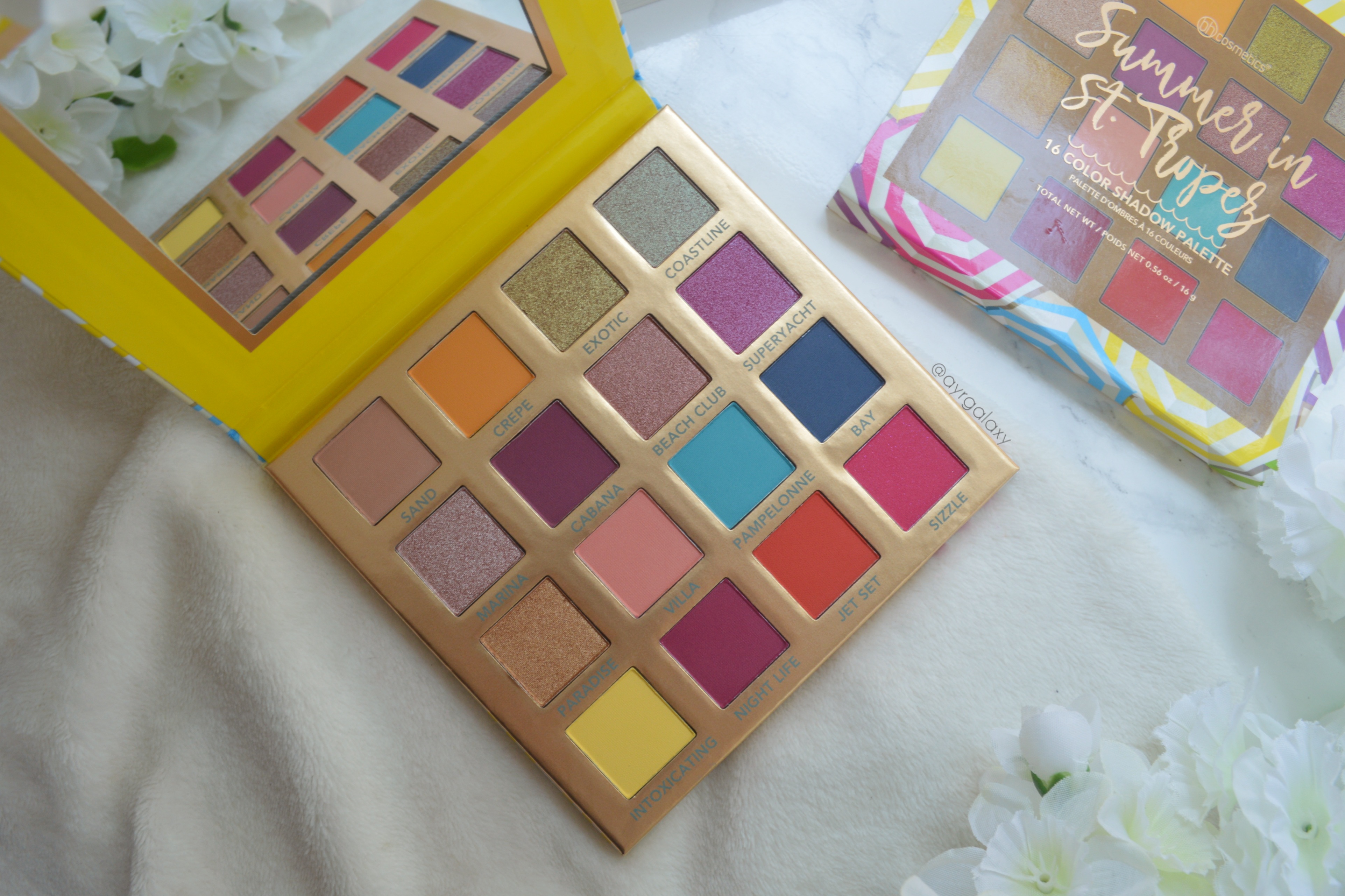